Last month, we saw how Nanda Baba, Yashoda and all the people of Gokulam very fondly celebrated little Krishna’s arrival and spent their time happily rejoicing.

Meanwhile in Mathura, knowing that the eighth child of Devaki was growing elsewhere, Kamsa, as per the advice of his evil ministers, decided to kill all the new-born children in Gokulam.

The first terrible demon who was given this task was Putana the demoness, who was capable of moving about in the skies and who, through her magical powers, disguised herself as a very beautiful woman. She held a lotus in her hand which made all the innocent Gopis of Gokulam believe that she was indeed Goddess Lakshmi.

Putana sweet-talked the Gopis, and came to poison Sri Krishna under the pretext of feeding him milk.

The omniscient Bhagavan closed His eyes when He saw her. While sucking the poisoned  milk, He sucked her very life breath -“prANaihi samam rosha samanvito 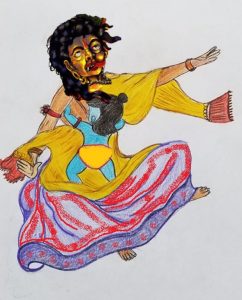 Unable to bear the pain she cried –”sA muncha muncha alam ithi” –”Please leave me…leave me ..enough!” She tossed about, crushed and stung, and fell dead.

The Gopas and Gopis came running, hearing her screams and were shocked to see a huge demoness in the place of the lovely lady, and baby Krishna playing on her lifeless chest. They took Krishna away and prayed for Him, anointing Him with auspicious substances like go-muthram and go-dhuli.

They had to cut up Putana’s huge body in order to cremate and get rid of it. And when they set fire to it, a very miraculous thing happened – the smoke that arose from her body had the sweet fragrance of aloewood -“aguru sourabhaha”, as though from an incense.

The reason was that the moment Bhagavan Krishna hugged and sucked her very life, she was completely purified and attained Vaikunta. Putana, the blood thirsty demoness, came with the most cruel intention of killing Lord Krishna with poison, but Bhagavan not only wiped away all her sins, but placed His charana on her lap; the Lotus Feet that His devotees treasure in their hearts; That which is worshipped by the entire universe and all the gods; and finally blessed her with the greatest state- satgatim, the same state which is attained even by Yogis only after years of intense sadhana.

When Sri Shuka speaks of this immeasurable grace of the Lord on Putana, he is extremely moved. Unable to fathom the Lord’s compassion, he wonders saying,

“If Putana [one who came to feed Him poison] herself attained such a high state, then what can one say about those dear ones who offer everything to Krishna – the Paramatma – with pure devotion? The mothers of Krishna, the cows and the calves in Vraja and all the Gopis who had such great motherly affection for Krishna even more than their own children and who fed him their milk with immense love, what great state would they attain?”

Many Krishna Bhaktas have also sung on this leela of Bhagavan overwhelmed by His compassion. The Guru Grantha Sahib of the Sikhs also comments about this particular leela of Bhagavan and says, Putana left her prana crying out the name of Hari. In the 3rd canto of Srimad Bhagavatam, when the two dear Krishna devotees Uddhava and Vidhura meet, Uddhava talks of this compassion of Bhagavan saying Putana was blessed to attain the state which would be befitting only to the mothers of Krishna and he wonders if there can be a more compassionate Lord in whom we can take refuge – ”kam vA dayALum sharanam vraje ma”! A very ardent devotee of Sri Chaitanya Mahaprabhu by name Pundaleeka Vidyanidhi, entered into an ecstatic state at the very mention of this particular line –”kam vA dayALum sharanam” from Srimad Bhagavatam.

In the song karuNA mUrtthi nIyallavO, Sri Swamiji sings on this divine quality of infinite compassion of Sri Krishna. Sri Krishna’s compassion knows no bounds and to the persons who have surrendered themselves to Krishna, Bhagavan protects them like a strong fortress wall. Here, Sri Swamiji takes the instance of Putana moksham to describe this compassion of Bhagavan.

Sri Swamiji concludes the song telling Lord Krishna that he too has hence taken refuge unto Him.

Pallavi
Oh dear Krishna, you are the most compassionate of all

Anu Pallavi
You are one who protects His people who have surrendered unto Him, verily like a fortress wall.

Charanam
You gifted priceless gems for just a few fruits
You granted liberation even to she who came to feed you poison,
You guided Arjuna, when he stood with fear and anxiety,
And I Muralidharan, surrender and take refuge at Thy Lotus Feet.