This month’s quiz is based on Daskshineshwar Kali Temple, a holy temple, revered by everyone, located in West Bengal, India. 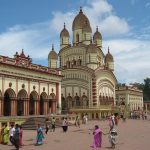 1. In which state in India is Dakshineshwar located?
A. Bihar
B. West Bengal
C. Assam

2. On which river bank is Dakshineshwar temple located?
A. Godavari
B. Hooghly
C. Cauvery

3. Name the presiding deity in Dakshineshwar temple.
A. Kali
B. Rama
C. Ganesha

4. Name the great Mahatma who spent most of his life in this temple.
A. Sri Bhadrachalam Ramadas
B. Sri Ramana Maharishi
C. Sri Ramakrishna Paramahamsa

6.What is the name of the presiding delty Kali in Dakshineshwar temple?
A. Lalitha
B. Bhavadharini
C. Ashtalakshmi

7. Name the disciple of Sri Ramakrishna Paramahamsa who went to have the darshan
of Mother Kali three times to take care of the needs of his starving family.
A. Swami Brahmananda
B. Swami Premananda
C.Swami Vivekananda

8. Who was the brother of Sri Ramakrishna Paramahamsa who became the first priest
of Dakshineshwar Kali temple?
A. Ramkumar
B. Rameshwar
C. Ramanath

10. Apart from the sanctum sanctorum of Goddess Kali, what is the other significant
sanctum that devotees visit in Kali temple?
A. Sri Ramakrishna’s Room
B. Swami Vivekananda’s Room
C. Swami Brahmananda’s Room